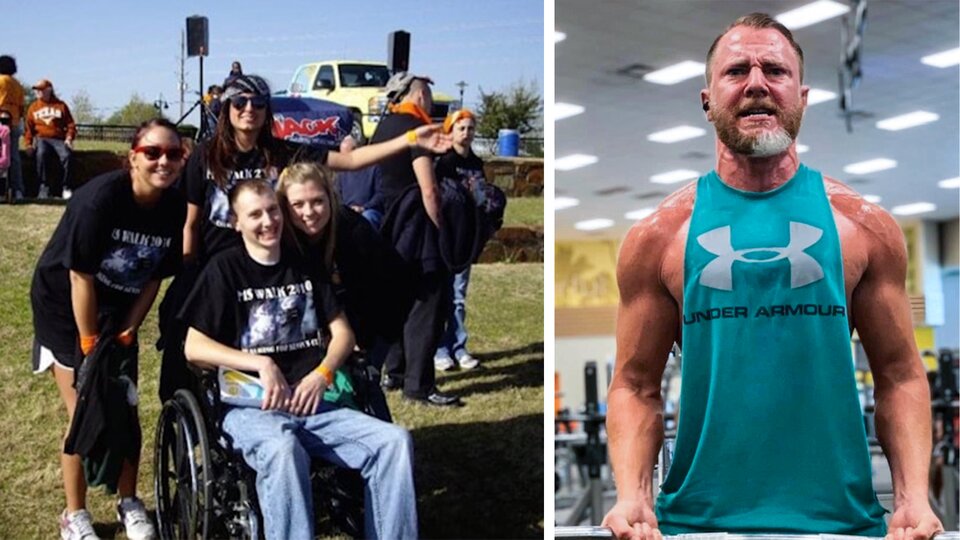 At the age of 22, Kevin was diagnosed with MS, and by the time he was 25, he was in a wheelchair. With his health in shambles and his future uncertain, Kevin felt that he was losing his life one day at a time.

Rather than give up, Kevin opted for positive thinking and exercise to turn his life around. Ten years later, he’s beat back his symptoms and achieved the life he almost thought was impossible. Here is Kevin’s story.—H.E.

I Went from Normal One Day to Sick the Next

I was diagnosed with MS at the age of 22. I was normal one day and I woke up the next day sick. I started taking these medications that had me on the floor shivering in the middle of summer. It was like having malaria every day of the week. At one point, I was on an IV treatment with a risk of developing PML, which is basically brain rot. That in itself was terrifying.

It was around the time that Facebook started getting bigger, and you started seeing all the friends you went to high school with graduating college and having a family. And I was sick and feeling like I had nothing ahead of me.

MS Is All Different for All People

No two people with MS are the same because it affects everyone differently. MS can change day by day or even hour by hour. I would walk and just collapse to the ground. No balance, no coordination, no short-term memory. I’d had a 4.0 GPA at college, and in just one semester I dropped to a 2.8. All because of the memory issues with MS.

My personal downfall was my mental health, because I just felt negative. I didn’t focus on anything good. I thought, what’s the point? And I was taking this medication that made it worse. You’re sick every day. It’s hard to be positive when you’re sick. It’s like constantly struggling with the flu.

At the time, I weighed 115 pounds. I was so skinny. Some days I could walk, and some days I was collapsing and had to be carried out of my job. It was a rollercoaster. I went to my doctor, and my little brother came with me and sat behind the doctor. He watched the doctor go online to see what kinds of medication to get me. That was kind of an eyeopener for me, because if he could do that, I could do it, too. 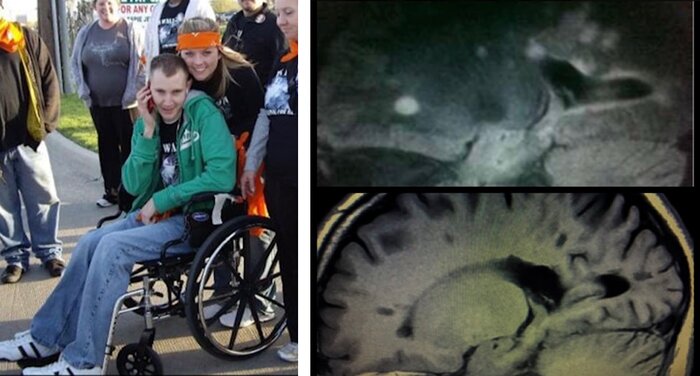 We left that doctor’s office, and I decided I was going to do it my way. I went home and threw all the medication away. Doctors had told me if I got off that medication, my disease was going to get worse and go a lot faster. I just figured, if I can have a few more years of not being sick every day, I’ll take it.

Changing My Mindset Is What Saved My Life

A friend who is a nurse introduced me to a book called, “The Secret.” It talks about positive thinking, that the energy you put out is the energy you get back. When I first read the book, I thought it was a big crock. I thought there’s just no way being positive is going to affect your life that much.

And then I thought to myself, what have I got to lose?

I started with small goals. Then eventually I noticed that the goal I set a year ago I’d already accomplished, plus more. That’s when I realized I was on to something. I stayed positive no matter what. It just started off very slow.

Then I started studying the right foods to eat and learning about healing illness the natural way through diet. Prior to MS, I ate very poorly. Like every college kid, I was eating McDonald’s and Jack in the Box and all the trash foods. I changed the way I ate to a more natural approach— bananas, chicken, eating a whole lot cleaner. That was a big step forward out of the chair.

I Became Addicted to Change

I signed up for the gym and just sat on the stationary bike—because I had never been to a gym in my life—and I watched other people work out. I noticed that the more I bicycled, the less pain my legs would be in. So, every day I kept going. It was like an Energizer Bunny recharge—I’d get a week of no pain in my legs after putting the resistance on the bike up pretty high. I knew I was on the right track: I wanted that feeling more and more.

When I started to put on a little weight, it became an instant addiction. Being a skinny kid with his ribcage showing, then to start getting bigger and bigger. You start getting compliments from people you’ve never seen, people from high school. Seeing the change makes it so much more addicting. You just want to keep going and going. 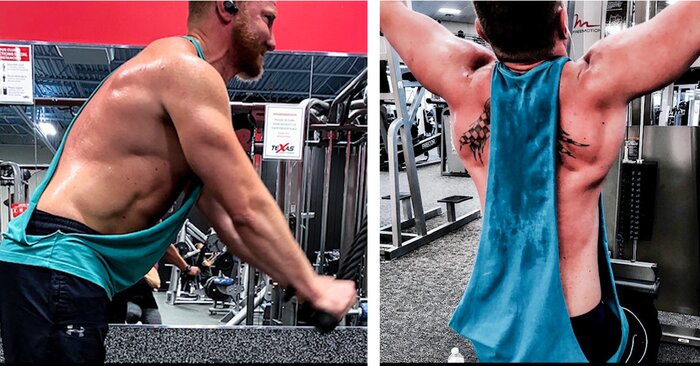 Your Diagnosis Does Not Own You

For me, MS was the greatest thing that ever happened to me. I am so thankful that I got sick. As odd as that sounds, it completely changed my life. In 2010, I did an MRI and the MS just lit it up like a Christmas tree. Then in 2017, I did another MRI and there were no active signs of MS.

My big thing now is to help people all over the world who have been diagnosed with MS. The first thing people always tell me is their diagnosis. And I tell them, “Your diagnosis is not who you are.” Your diagnosis can be a slight setback, but that setback can also be a step up. Change your thinking to accept that it might lead to something great in your life.

These days, I’m a conductor for the railroad, which is a pretty dang good job. My wife is amazing—she supports me. If I have a rough day, she’s there to pick me back up and be my person to lean on. And we have a little one—I’ve always wanted a little one, so that’s pretty amazing.

Everything that I went through that was a struggle, I now feel like there was a reason for it. Being able to reach out to others with this disease has made me feel that I can actually do something positive with my life. People coming forward saying that talking to me completely changed their life and gave them motivation to fight back. That’s pretty powerful. It gives me goosebumps right now just talking about it. 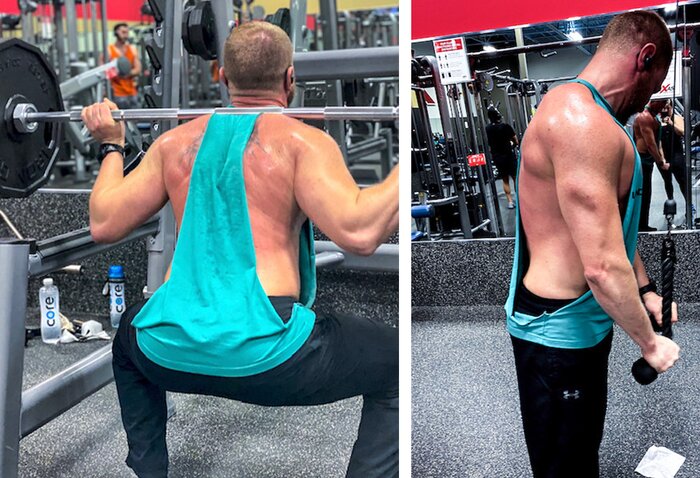 Most people think once you’re in a wheelchair, you’re stuck in a chair. You’re not stuck with MS. Most people think MS is the endgame, but it’s pretty much changing every minute. This is my story and I’ll be the one who writes it. I just kind of take it day by day.

Changing your life and trying to be healthier is not going to hurt you. If I’d gotten to the point where I thought I might be going the wrong way, I just wanted to get bigger. I never focused on failure.

1. Shift How You Think

If your whole life you’ve gone around thinking of bad things, thinking to yourself, “I’m going to fail at this, I’m going to fail at that,” that’s not going to get you anywhere. You have to reprogram how you think, believing, “I can do that,” or at the very least, “I can try.” It’s hard at the beginning, but over time it becomes a mindset.

2. Take Control of Your Own Health

You can’t let a disease diagnosis be who you are. I got rid of the medications that were making me sick and started studying nutrition and changing the way that I think and taking control of my own health. You have to find something that you’re passionate about and focus on the passion rather than the diagnosis. 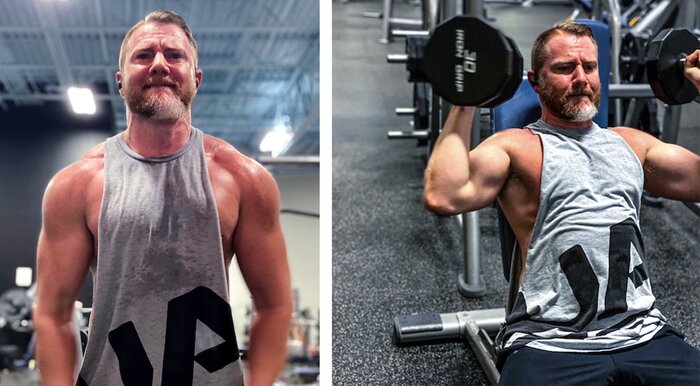 A bad day is just a lesson learned, not a setback. You may fail a few times, but it’s not going to hurt you as long as you’re changing your life by trying to be healthier and more positive.

4. Use Setbacks as a Step Up

I was in a relationship when I was first diagnosed, and we broke up. That was pretty much the motivation I needed to change. That breakup is what made me want to be better. Use a setback as motivation rather than discouragement. Turn your setbacks into steppingstones.

5. The Only Failure Is Not Trying

I was already in a wheelchair. I was already feeling sick every day. What did I have to lose by trying? In my case, making the decision to give exercise a try was the best decision I ever made.

To find a workout plan for your own transformation, check out BodyFit. If you want to share your success story with us to be considered for publication, send an email to​​​​ transformations@bodybuilding.com.